We’ve just wrapped up a busy second quarter of 2015 here at Field59! We’ve had two big code sprints this quarter that we are excited to tell you about. Here are release notes from 2.20 and 2.21: 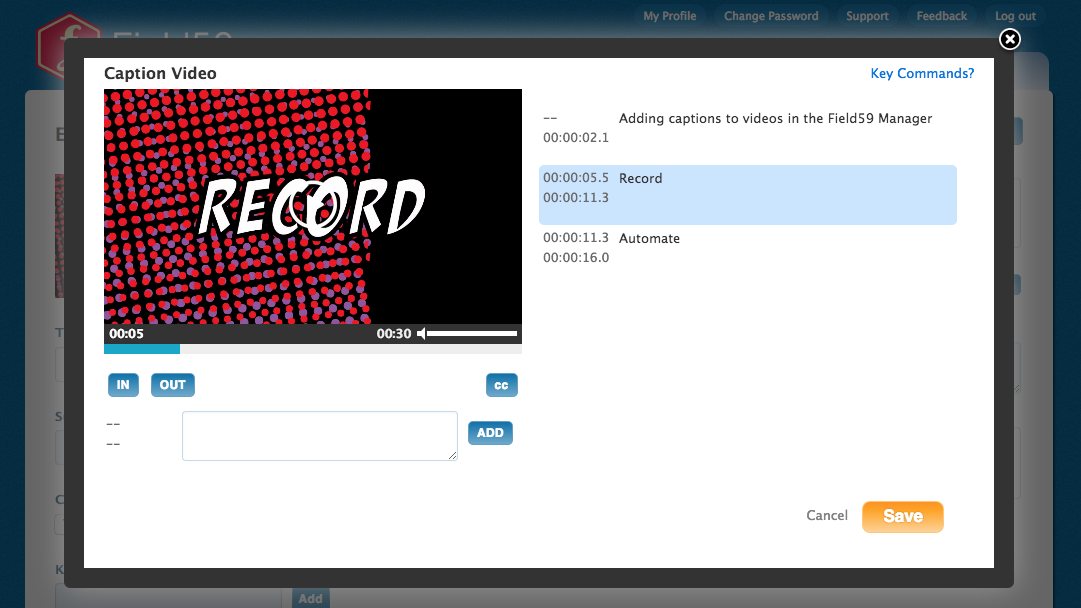 Users can now create and edit web closed captions for any video in the manager. Learn more in our Knowledge Base.

We have improved performance of the Field59 video manager in mobile browsers. Users on iOS and Android tablets and phones can log in and perform nearly all functions that can be performed using a desktop machine. This includes video upload, video and live stream previewing, and copying keys and embed codes. This opens up new flexibility for users to easily publish using mobile devices to websites and content management systems from the field.

A new player custom configuration allows users to set the player to unload automatically at the end of a live event without needing a page refresh by the end user. We’ve added this information to our custom player configurations Knowledge Base article.

A new database/reporting script pulls together video usage numbers from multiple sources. In the future, we plan to use this data as part of a customer-facing usage dashboard. Stay tuned for more updates on this later this year!

We are now using Elasticsearch to index nearly all data in the Field59 Video Manager. This will have multiple longer-term improvements for in-manager and end-user search, ability to work with closed caption data, and more. We will be building off this great starting point in future releases.

The “current video” in a playlist is now highlighted in the filmstrip in order to more easily signal to the end user which video is playing. Learn more about smart and manual playlists in our Knowledge Base.

All accounts now have a time zone applied. Timestamps for a given item in the manager will now display with times according to the account’s time zone (this will be no change for most users — it only affects any user with access to multiple accounts in different time zones). This resolves an issue encountered when Daylight Savings Time started or ended, and also takes into account all other time zone changes worldwide. (p.s. here’s a humorous video that gave us some comfort as we tackled this time zone project!)

Users can now preview larger versions of the available thumbnails for an item on the item’s edit page. This restores a function that was available in an earlier design of the manager.

Users can now make a clip from a video that itself was a trim. The manager will offset the times set and make the clip from the original source file so as to not degrade clip quality via multiple encodings. Learn more about Trim Video.