This article describes how users can replace a portion of video in the Blackbird editor while retaining audio and caption tracks. Users should already be familiar with the basic functions of Blackbird before attempting the tasks detailed below. Click here to review the basic steps to create a video in Blackbird.

This article describes a process similar to steps outlined here regarding replacing one portion of a video track with a still frame from the same video. However in this article, a separate video will be inserted instead.

Television broadcasters often face the need to remove copyrighted content — often national sports highlights — from news programming because they do not have the rights to distribute it online. In these situations, some broadcasters choose to insert other video in place of the copyrighted content while preserving the audio and captions from the broadcast. This article is written with that goal in mind.

The workflow described below would also apply to any video in which a user may want to remove the video track while retaining audio and/or captions. (Additionally, these steps can be generally followed to replace a portion of audio, or even captions, while preserving video, though exact steps would slightly differ as users would need to delete and add the appropriate tracks depending on the desired outcome of the edit.)

In the Files window, open the file you wish to edit. Mark your In/Out points for the entire clip in the left-hand (blue) source window, and move the clip to the right-hand (orange) editing window.

In the orange editing window, mark the In Point of where you want to start cutting out video. 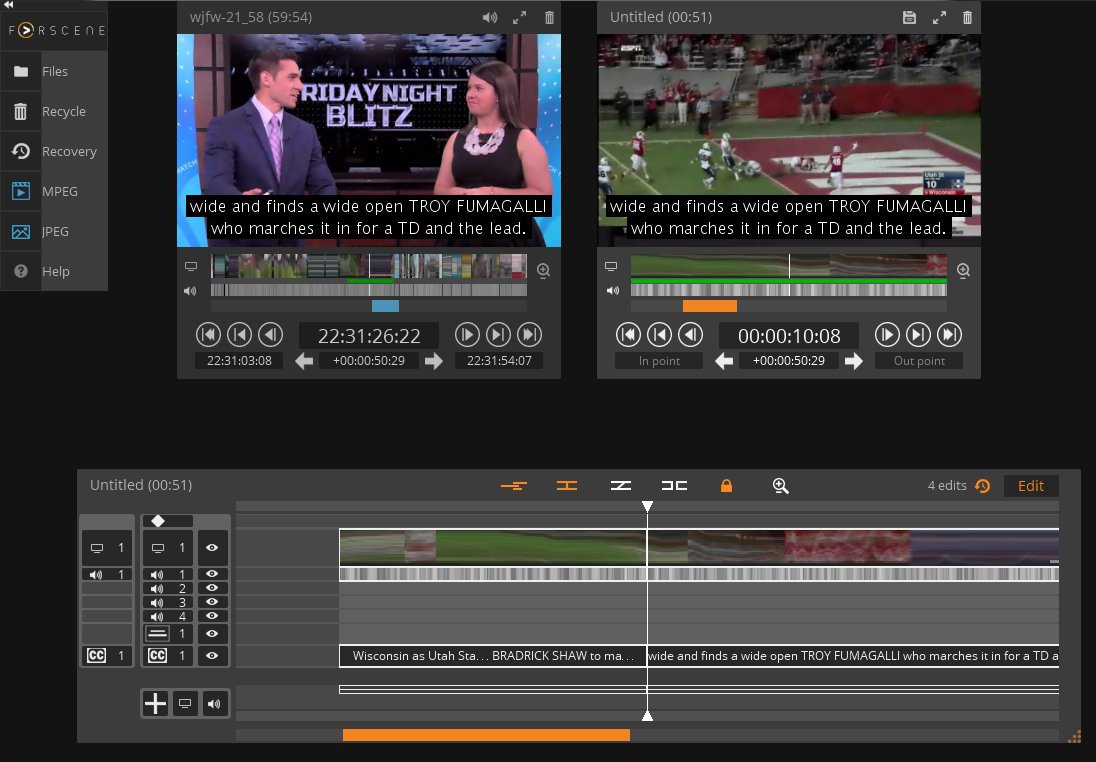 Then, in the Timeline, hit the Edit Point Button — this is the second icon (sideways H). That will create an edit point at your In Point. Repeat these steps for your Out Point for when you want to go back to the newscast video, to create a second edit point. 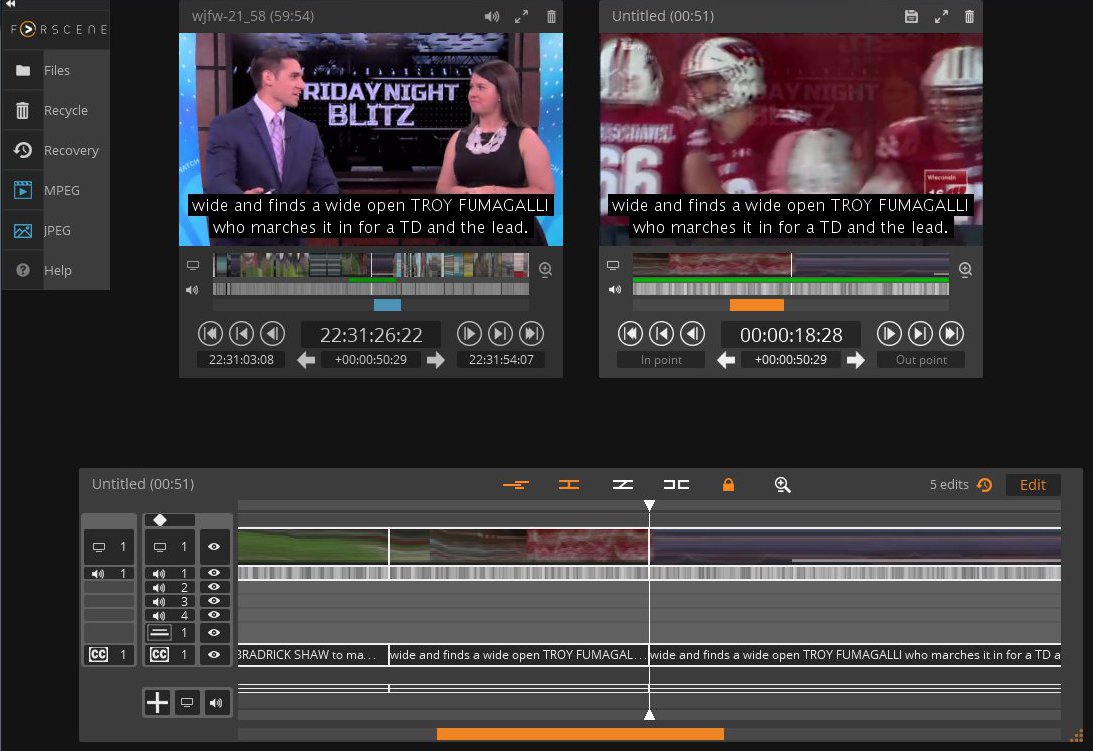 Next, In Timeline, in the second column on the left, deselect Audio Track 1 by clicking on that button. The button turns gray to indicate it is inactive. 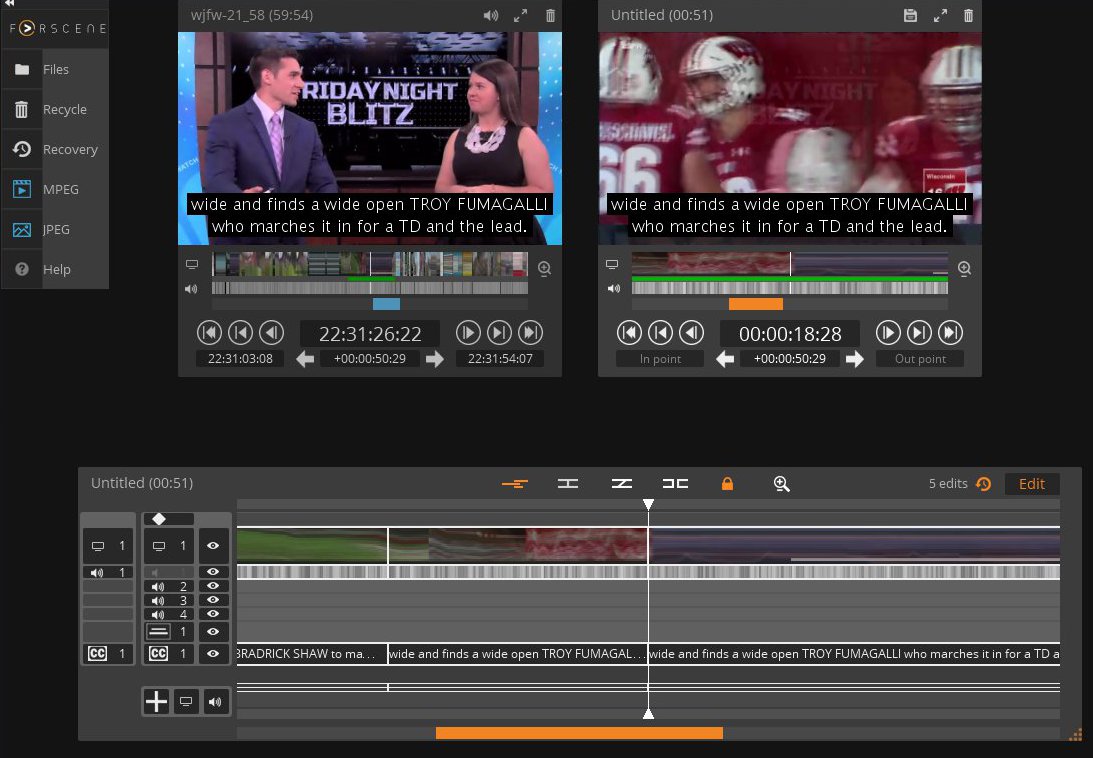 Also in that same column, deselect the Caption 1 track at the bottom of the column (Note: you may need to make the Timeline window larger at bottom right so as to not have to scroll to see the captions.) 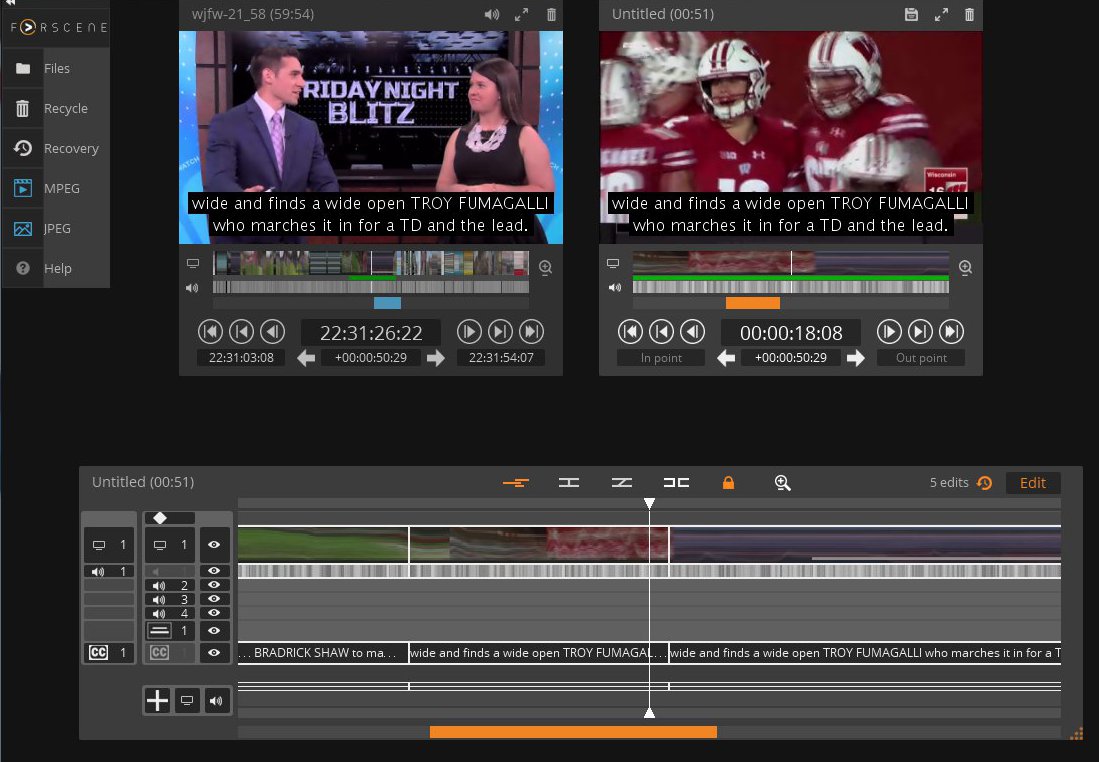 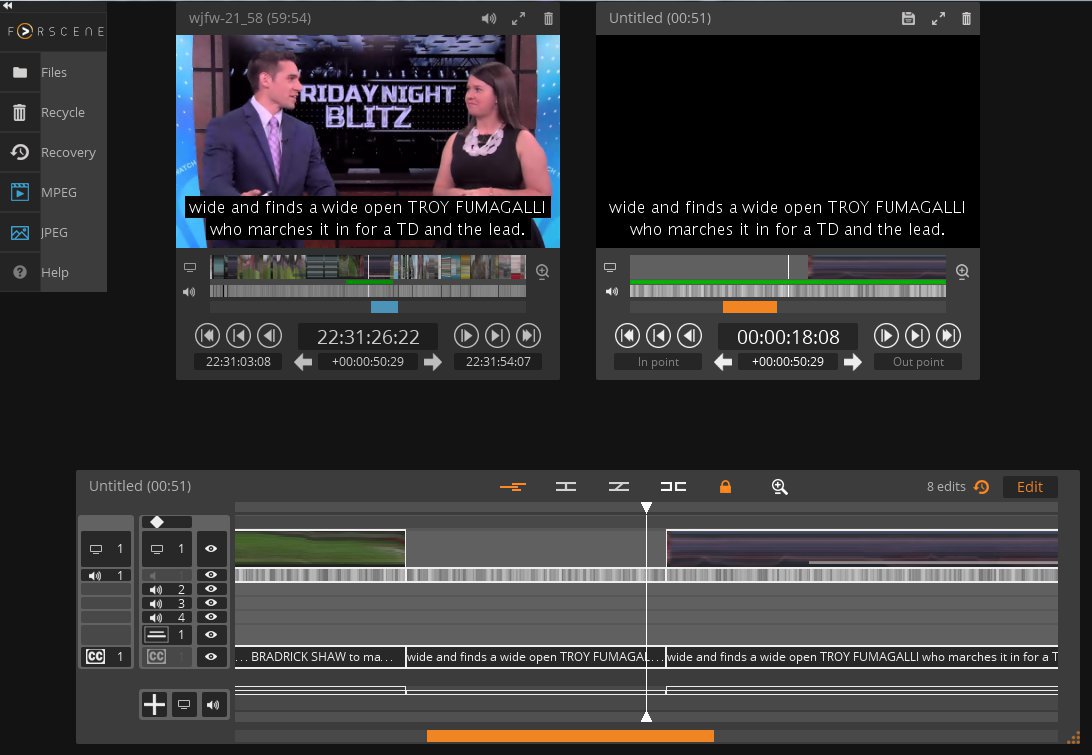 In the Timeline or orange window, move the cursor back to the start point in the clip where you cut out your video. Mark an In point. Go to the end of the part you cut out and mark an Out point. The difference between the two points is how much time from the placeholder video is needed to match the audio and captions from the original video.

Next, load the placeholder video file in the blue window. Mark In/Out points for the exact amount of time you need. 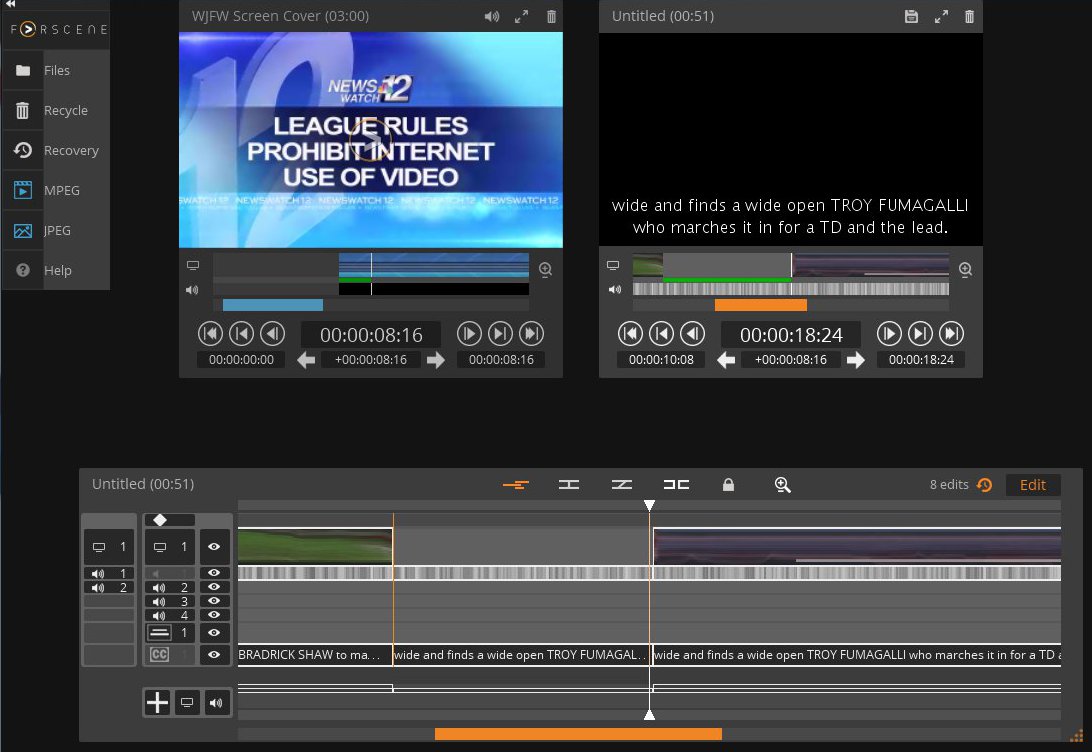 In the Orange window, click on the In point. Drag the segment from the blue window to the orange window. This will drop the portion of the static graphic video file at your In point. 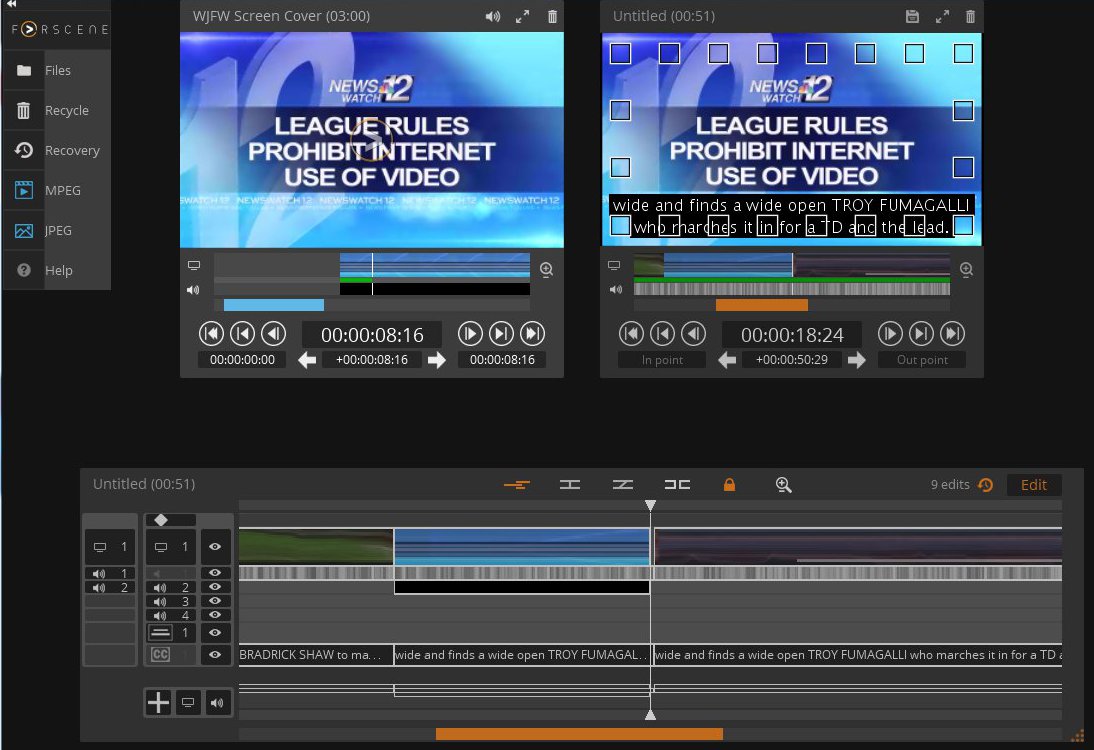 Finally, re-activate the audio and captions tracks by clicking on them. Preview the edited clip in the orange window. Give the edit a title, and drag to the Field59 button to start the transcoding process. 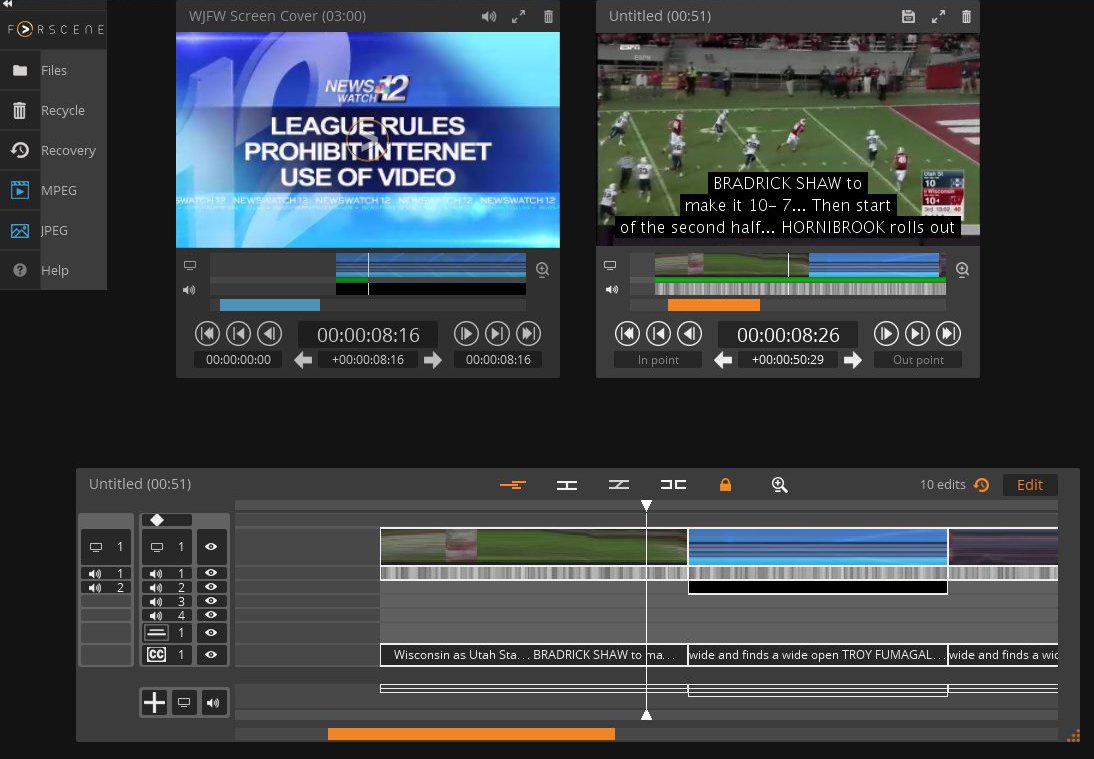